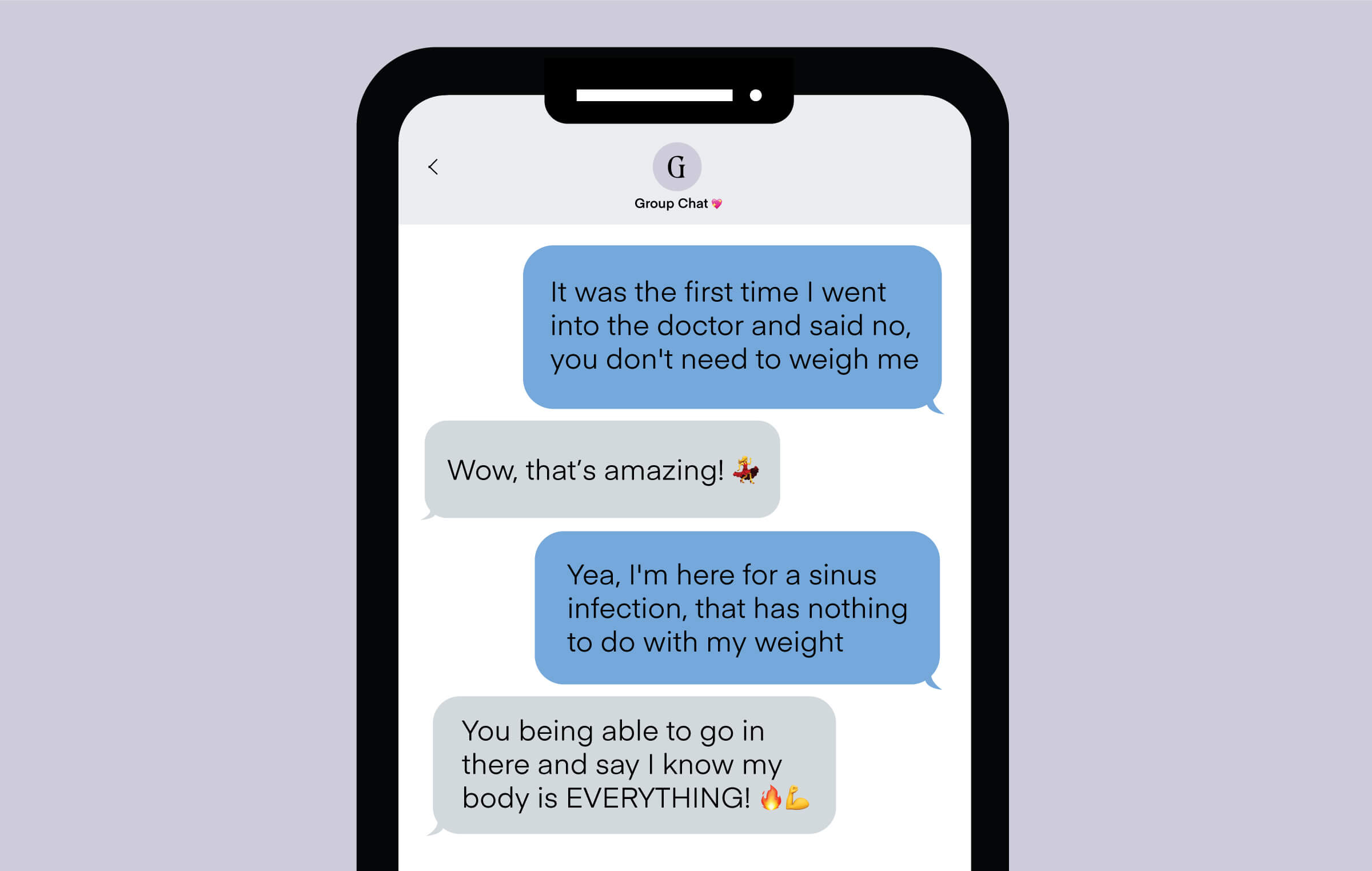 Going to the doctor is enough to raise your blood pressure—literally. The Mayo Clinic refers to it as “white coat hypertension,” where blood pressure escalates due to the anxiety caused by anticipating a doctor’s appointment. And for plus-size women, the general fear of “am I dying?” is compounded with the dreaded probability that the entire visit will center around her weight.

The truth is weight bias creates a unique challenge for plus-size women when it comes to receiving equitable healthcare. Due to these biases, plus size women are often neglected and mistreated by healthcare professionals. The good news is that the healthcare industry is evolving and making strides towards decoupling weight and health making it more possible for women to receive more holistic healthcare. What started as a group chat amongst a few women in the plus community I know, became a round table discussion where I learned about their experiences with healthcare and found out how they have been able to turn it around for themselves.

“I remember my mom saying after the fact, “Maybe she doesn’t need to go on antidepressants. Maybe she just needs to not be berated at the doctor’s office.””

Christine Yarde: When did you first get the message from a health care professional that your weight was something to be concerned about or that it was a problem?

Community Member 1: Fourth grade. In the fourth grade I don’t know if I had just had a growth spurt or whatever, but the doctor told my mom that my weight was a problem and I needed to go on a diet. And yeah, the message was received loud and clear. I mean I was on my first diet in the sixth grade, where I was just drinking Slimfast, and that was it. It just shapes how you behave in the world for the rest of your life.

Community Member 2: I was probably 13 or 14. My most vivid memory is the nurse that came in before the doctor kind of assessing the situation and throwing comments, like, “of course, if you lost some of the weight that would not be as big of an issue”. Just finding any way to bring that back into the conversation, where I was like, “okay clearly I can’t just go on existing like this.” I got upset, and felt attacked and the nurse recommended that I go on antidepressants to deal with the emotions that came up. I remember my mom saying after the fact, “Maybe she doesn’t need to go on antidepressants. Maybe she just needs to not be berated at the doctor’s office.”

CY: That is so intense and you brought up something that I would love to talk about. How do those messages that you received throughout your childhood impact the way you walk into a doctor’s office as an adult?

Community Member 3: I vividly remember going to the OBGYN in college. I think I was 19 and without my mom. I had known that we have a family history of PCOS and I knew that that was something that I would have to deal with in this doctor [appointment]. I went in and I said, “I work out, I go to the gym.” I was doing all of the things that I thought I should be, and she was like “if you ever plan on having a child, you have to lose at least 100 pounds.” I remember that truly like fueling my depression and suicide and anxiety. I thought that if I hurt myself bad enough that a doctor would have to fix me and if they were going to fix me they would make me fitter because that was the thing I was supposed to be.

“I was able to say this is my body, I live with this body more than someone who sees me for 30 minutes. I get to say what’s going on with my body.”

CY: I think it’s so interesting that we all seem to have parallel experiences just based on the fact that we are quote/unquote or have been quote/unquote overweight, for most of our lives. And it’s across age, race, socioeconomic status but it doesn’t matter. If you’re deemed to be overweight, you can pretty much count on having a similar experience with medicine.

I remember when I was first able to advocate for myself at the doctor. I was able to say this is my body, I live with this body more than someone who sees me for 30 minutes. I get to say what’s going on with my body. When did you guys come to that realization?

Community Member 4: So I honestly think like once I kind of realized that was when I felt a lot more comfortable advocating for myself. I started by reading The F*ck It Diet® and Anti-Diet. Just being armed with [that information]. I know that you [the doctor] talking about my weight has been proven to lead to worse care so we’re not going to do it because I now know the science.

CY: So where and how do you find those health affirming doctors, because when you do find them it’s life-changing.

CM 4: They’re really good dietitians. I think they’re like doctors, like there’s probably way more bad ones than good ones, but I see a dietitian every other week and she’s unbelievable. The good ones all advertise themselves as anti-diet. It is becoming more popular and you can see them more [often]. It’s probably easier to get in and the cadence is more regular. So that’s been helpful to me because they are more up on the new science about dieting and weight cycling and stuff.

CM 1: I literally will Google: fat positive doctor near me. There are directories and there are people who are gathering communities around sharing healthcare professionals that are weight neutral. Because I think it’s going to be slow to change in the medical industry.

CM 3: I found my primary care doctor from a friend who’s a plus size model. I was like “hey you live close to me, who’s your doctor?” There are now more people talking about it, talking about the negative, which is bad, but also saying like here are the fat approved doctors that I really loved.

“More doctors should ask people how they’re feeling. That seems like such a simple question but really is what’s missing.”

CY: I love the idea of community and that Dia is a part of that community, because I will say for me this is the first place where I really connected with people who have a similar experience and that doesn’t happen often. I think that the community sharing resources is really going to be the next step in changing a lot of people’s experiences with healthcare.

In your opinion, what would you like healthcare professionals to understand or do to create a more accepting environment for all kinds of body types and people.

CM 1: I want you [the doctor] to evaluate the things in my appearance that could be specific to an ailment. If I have a rash let’s talk about it, if my skin color is green, let’s talk about it, not making assumptions about me based off of my body size. You took a Hippocratic oath to do no harm and weight bias does so much harm.

CM 3: More doctors should ask people how they’re feeling. That seems like such a simple question but really is what’s missing. How you are feeling is so much more than just what hurts or what’s broken, it makes a huge difference.

For more resources check out Health At Every Size. 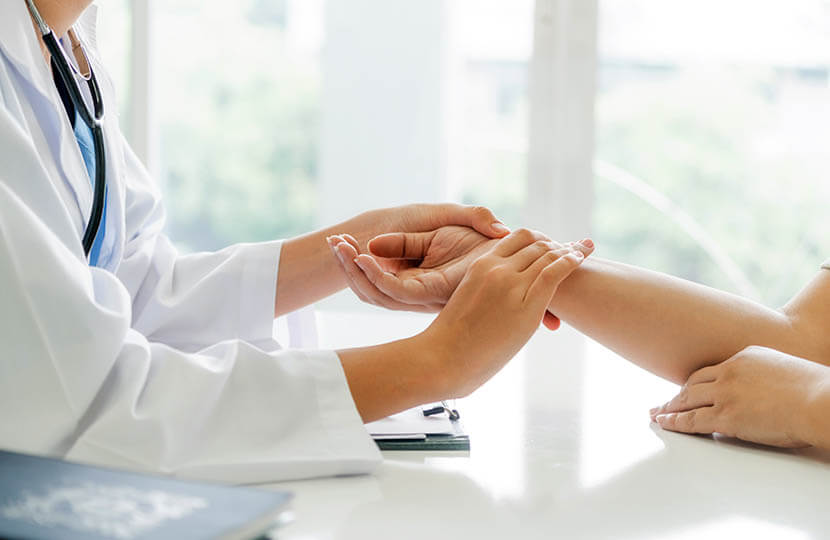