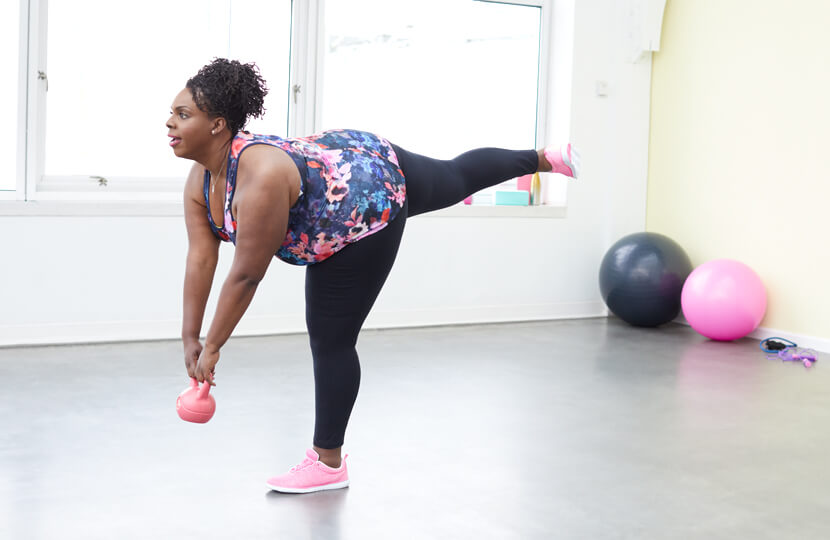 W  e often tell ourselves that we’d be happier if we had more time, more money, or lost those “extra” pounds. Writer and influencer CeCe Olisa is here to show you how to live your fullest life right now. Co-creator of theCURVYcon, CeCe is also known for writing content and producing videos for women sizes 14 and up who want to be active. This interview has been condensed and edited for both clarity and length.

Has being active always been a part of your life?

I did musical theater for a long time, so I took tap dance classes, jazz classes, ballet classes. I’ve been dancing forever—I had the patent leather tap shoes with the big bows—the whole thing. 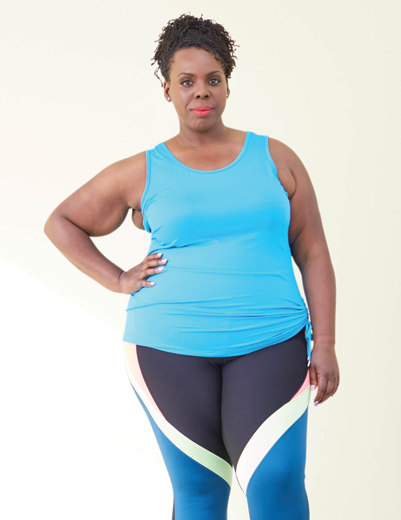 It’s funny—being plus-size can sometimes make you second-guess your own abilities and your own talent. I went to a musical theater conservatory for college and they would hold group auditions to place you from level one through five. I knew I could dance, but because I was plus size and nobody else was, I didn’t know how it was going to go. I remember being one of the first people to step forward, and they told me to do a time step, do a double time step, do a triple time step. And I’m nailing, nailing, nailing it. I was doing everything they asked me to do, and doing it impeccably. No one else had been able to nail those things.

And when I finished, it was quiet, then everyone roared with applause. It was a very affirming thing, to be seen as talented, no matter what. And even though I was having a lot of body insecurity, I was in a leotard and tights as a size twenty-two, eighteen-year-old girl. It was a triumphant moment for me. Being active through dance has always been a throughline for me, even as I’ve transitioned more into fitness. I trust my body. I know what my body can and can’t do. And I know that my size sometimes has nothing to do with my abilities.

Have you ever taken a break from being active?

When I was studying musical theater, I was taking dance classes four times a week. Then, when I graduated, I wasn’t taking those classes, and I wasn’t seeking them out. So I woke up one day and thought, “Oh, I haven’t moved my body in a long time.” So I started to seek out places where I felt comfortable working out. I would try to go to Broadway Dance Center, and the other famous New York dance studios, but the energy was very competitive. They were filled with people who were keeping up their dance technique so that the could be Broadway stars. And that wasn’t what I was looking for. So I ended up finding some really cool cardio dance classes at the gym in my neighborhood that I loved, and I’d go a few times a week and just rock out. I felt good, and I felt comfortable. That’s how I got back into it.

I know what my body can and can't do. And I know that my size sometimes has nothing to do with my abilities. 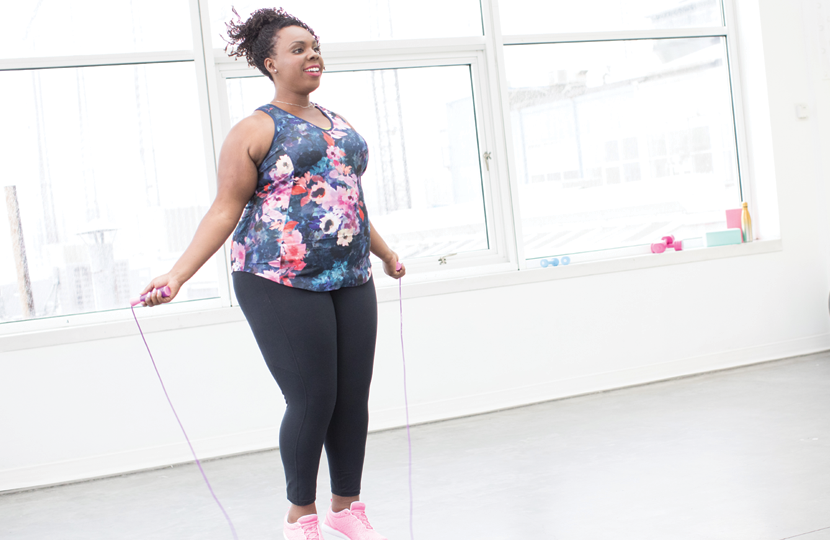 You mentioned feeling “comfortable.” Why is that important?

When I’m in spaces where I feel good and where I don’t feel judged, I can focus more on what’s important. Gymtimidation is a very real thing. But even if you feel like all eyes are on you, they’re not—everyone’s focused on themselves. If you’re feeling awkward, and you feel like there are a lot of eyes on you, that’s not where you want to be. You want to be in spaces that are affirming of who you are. So maybe that’s a women-only gym or an outdoor yoga class, and you bring your friends along to feel safe. You have to look for what works for you.

What are your favorite ways to stay active?

My favorite ways to stay active are swimming, dancing, and a good bootcamp. I love to lift and throw things and punch things. Sometimes strength training can be underrated. When I’m doing a lot of strength training, I’m more flexible, and my knees are less sore. As a bigger girl, you have to acknowledge that you’re carrying a lot more mass. So, the stronger you are, the better you are at carrying that mass. Have you noticed that most plus-size girls have great legs? It’s because we’re carrying around heavier weight, and that’s nothing to be ashamed of. But it’s cool to use it to your advantage. So if you told me, “CeCe, do you want to go flip some tires later?” I would go. That sounds like an amazing way to spend my afternoon.

Once you’ve finished working out or taking a class (or flipping tires!), how do you feel?

98% of the time, when I go to the gym, I leave in a much better mood than when I walked in. We’re all at desks and in cars and on the subway all day, so we’re kind of confined in our bodies. Whether it’s taking a long walk or going to a class, moving my body makes me feel more free, loose, and light. Plus, your endorphins go up. I’m not a scientist by any means, but I know what that’s like.

For those of us who struggle with a lot on our plates, it can seem counterintuitive to go to the gym. But that workout might give you the boost you need to get through the day in a better, more productive and efficient way. If you need time and space to think things through, sometimes working out alone is the best thing to do. A lot of my best ideas have come when I’ve been swimming, because it’s just me, with nothing else on my mind. There’s a cool solitude in working out by yourself.

If you told me, 'CeCe, do you want to go flip some tires later?' I would go. That sounds like an amazing way to spend my afternoon. 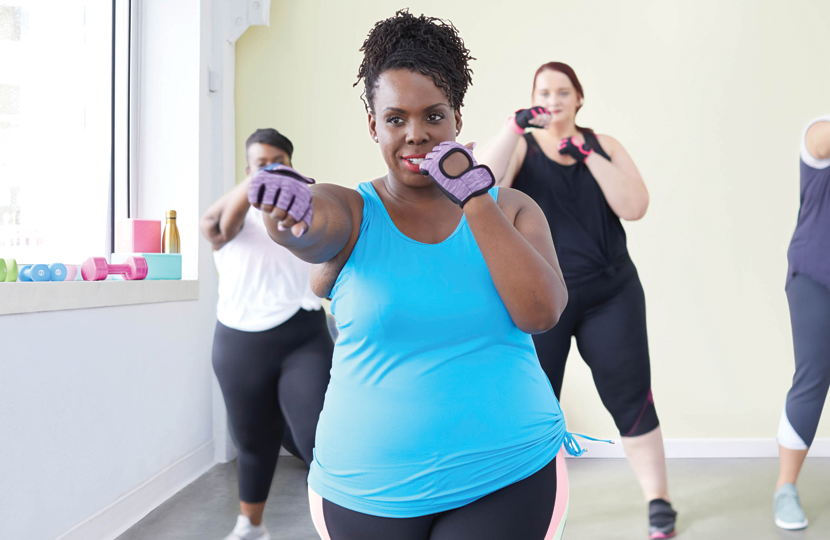 Why did being active become such a central focus of your body-positive content?

I think it’s important to redefine what health looks like. If I’m consistently eating and moving in ways that are supportive to my body, it doesn’t matter what I look like or what the size of my jeans says. I’ve been plus size since the day I was born. It was written in the stars that I was going to be a big girl.

At the same time, I was diagnosed with PCOS (Polycystic Ovarian Syndrome) in high school, which is actually very rare—a lot of women don’t get diagnosed until they’re trying to get pregnant. Some of the symptoms include hair where you might not want hair, carrying weight in your midsection, oily skin, acne, and insulin resistance. There are things that a girl with PCOS should not be eating, so for me, I’m at my healthiest when I’ve eliminated those things from my diet. Not from a restriction perspective, but because they don’t support me being my healthiest.

I want to have babies one day. I want to be able to run 5Ks, and participate in mini-triathlons, and do fun things when I’m 75. I know what my body can do, but if I want it to keep doing those things, I have to commit to a healthy lifestyle. I don’t think it’s right for me to talk about how to look cute in a dress if you don’t feel cute inside. Outfits are great, lipstick is great—but it all starts from the inside.

For you, how does leading a more active life fit in with being body positive?

When I started to embrace body positivity, I thought it meant that I couldn’t want to change my body at all. But what I’ve realized, through my own personal journey and having some health setbacks over the years, is that honoring what your body needs from a health perspective is the most important way to be body positive. It’s up to me to meet my body wherever I am, and to treat it with all the love I can.

If there’s something in you that’s saying, “Gosh, I need to be more active,” or, “I need more greens in my diet,” there’s nothing wrong with working toward that. You’re not working to fit yourself into someone else’s cookie-cutter look, but you’re working to be the best version of yourself. So that when you put on that amazing outfit, you know that you’re nailing it all over the place. 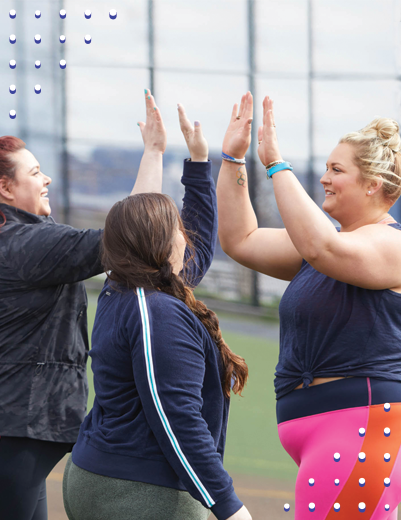 From busy moms to professional athletes, there’s no wrong way to thrive. This month, we’re celebrating unstoppable women sizes 14 and up and how they’re Fit to Thrive. Click through to learn more about the campaign and hear from other incredible women.