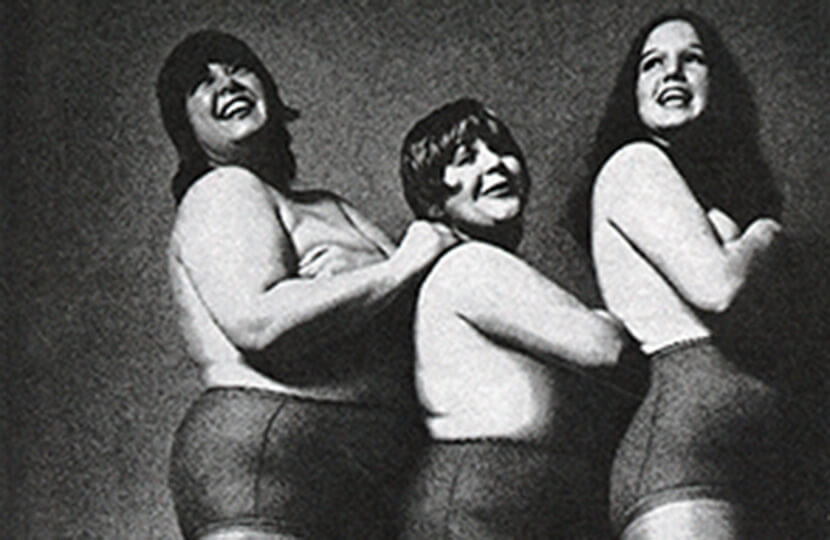 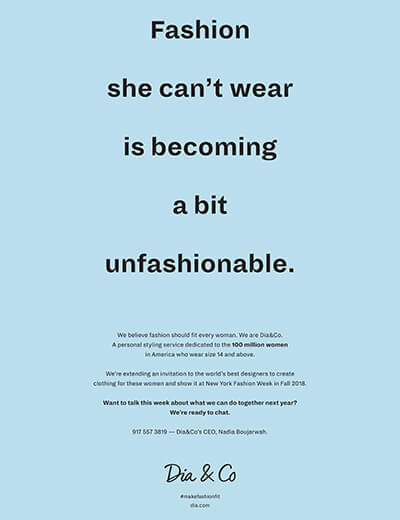 Spring Fashion Week 2017 marked Dia’s biggest fashion campaign, #MoveFashionForward. Since this groundbreaking moment in Dia’s history, we’ve collaborated with some of the top brands to bring their collections into plus sizes. Now, our community has more options than ever for expressing who we are through what we wear. With every new brand in our inventory, every exclusive collection we develop, and every product feature we add, we’re getting closer to our goal of a size-inclusive future.

If you need a refresher on how far we’ve come—and how far we still need to go—we consulted with plus size history expert Dr. Lauren Downing Peters to recap everything you need to know.

Back in the 1800s, the ideal body shape was a curvy one. According to Dr. Lauren Downing Peters, Assistant Professor of Fashion Studies at Columbia College Chicago, things changed in the 1900s. As technology became more advanced and clothing was no longer made to order, mass manufacturing meant that fewer variations in body type could find the clothes they wanted. Originally, so-called stoutwear was separated from the rest of sizing to address our community’s unique challenges when shopping, from stores not selling larger sizes to salespeople providing terrible customer service.

In 1904, the first exclusively plus-size retailer came onto the scene. Lena Bryant (aka Lane Bryant), already known for her skills in altering mass-produced pieces and creating custom lingerie, opened up a store in New York City. An early customer requested a maternity dress, which was considered taboo at the time. The style was the first of its kind. 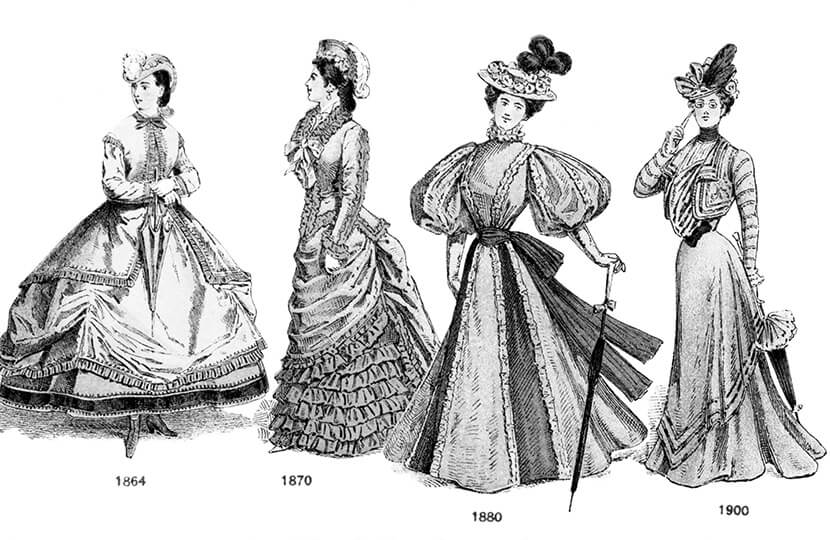 In 1909, Bryant met Albert Malsin, a mechanical engineer and her future husband. According to Peters’ dissertation, Malsin was so inspired by Bryant’s adjustable waistbands that he patented new designs to fit varying sizes of women’s bodies, including “stout” bodies. (He wasn’t alone—in the teens and twenties, dozens of patents relating to stoutwear were filed.) Malsin used his engineering background to understand “stout” women’s curves and surveyed over 4,000 customers.

Using his research, and cross-referencing with insurance information relating to 200,000 female policyholders, Malsin learned how women with bust size 44+’s shapes were different from the standard sizing and grading systems. Malsin’s research led him to the discovery that women’s bodies, especially above a certain size, varied greatly in shape from person to person. To simplify things, he established and published the three most common shapes he experienced in his research. Though “full-busted,” “stout all over,” and “flat-busted” don’t really hold up a century later, the thinking behind the three distinct shapes still influence plus-size fit today.

According to Peters, by the time the 1940s rolled around, America was trying to assert itself as a global superpower in the fashion industry. As a result, the idea of who the “American woman” was came into question. It was decided that she was tall, athletic, and well-rounded. Unfortunately, investment in creating great clothes for women who didn’t fit into those categories fell by the wayside. Even when retailers did sell clothes in plus sizes, the illustrations in ads didn’t realistically portray the women they were selling to, or the language used bordered on offensive. 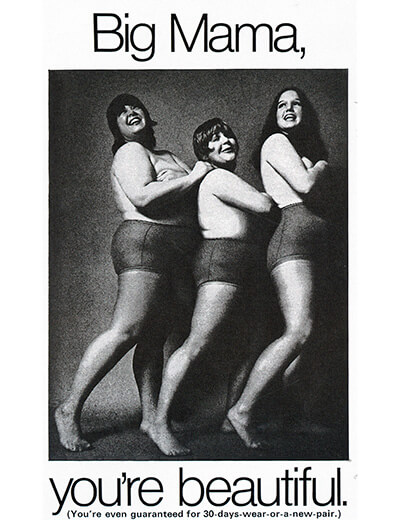 In the 1960s, the revolution was everywhere. Taking cues from Vietnam War protests, women banded together to fight weight bias and discrimination through the radical fat-acceptance movement. Though the movement wasn’t about fashion, it set the stage for the shift in attitude that happened in the industry the following decade. In the 1970s, fashion became more about loving our bodies than trying to hide and conceal our natural shapes. A modeling agency that exclusively repped plus-size and petite models, Big Beauties – Little Women agency, was even launched during this time.

It wasn’t until the ‘80s that “plus size” became the descriptor of choice for sizes 14 and up, according to Peters. Even high-end fashion designers started getting in on the game, including Valentino and Givenchy, because of a decline in the sale of luxury clothing. In fact, Vogue, the fashion magazine notorious for the lack of size diversity on its pages, had its only plus-size advertorial—as in, money had to be paid to make it in. 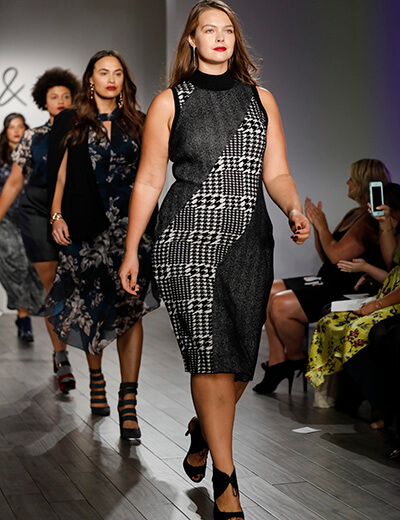 After the new millennium, communities on the fringe flocked to Tumblr to find people just like them—and a new crop of body-positive pioneers entered the scene. 2008 saw the beginning of the plus-size fashion blogosphere, with big names like Marie Denee, Gabi Fresh, and Nicolette Mason leading the charge. 2009 brought the first year of Full Figured Fashion Week, organized by former plus-size model Gwen DeVoe. We no longer had to rely on magazines or advertisements to represent us—there were stylish, confident women who wore sizes 14 and up showing us that we belong in fashion. The early plus-size fashion blogosphere paved the way for the bloggers and YouTubers we know and love today and heralded a new era of body positivity.

These days, plus-size models are gracing the covers of magazines and walking the runway, and actresses of all sizes are starring in film and on TV. There’s no shortage of amazing plus-size fashion bloggers to look up to or body-positive champions to admire. Even with plus size models becoming more popular, we’ve still got a long way to go. Some plus-size fashion brands continue to reference the “slenderizing” technical aspects of their pieces, women sizes 14 are still underrepresented in media, and women don’t all have equal access to the same number of clothing options. So, until that happens, we’ll keep working hard every day to move fashion forward.

Special thanks to Dr. Lauren Downing Peters for sharing her research and learnings with us. Stay tuned to the “Know” category for more plus-size fashion history content in the next few months!