You Have the Right to Take Up Space: A Guide to Flying While Fat

I have a mantra that I say every time I prepare for a flight: “You have the right to take up space.” I repeat it over and over like a meditation. I say it in my head at first, slowly building to a whisper so it feels more palpable and believable. Because the actual truth is—flying on a commercial jet for a plus-size person is like navigating through an obstacle course on American Ninja Warrior.

I am a US size 28 and an avid traveler, so I’ve been around the tarmac quite a few times. I’ve experienced everything from worried looks down the aisles to bruises on my arm from the beverage cart crashing into me mid-flight. Airports are breeding grounds for fat shaming. With seats on new planes being made smaller each year—yes, inches are actually being shaved off, the prospect of flying to that dream destination can seem daunting.

Plenty of people have told me that I need to face reality. That if I want to continue traveling, I have to lose weight. When you quite literally don’t fit into this man-made world, it’s easy to start believing the rhetoric that flying is a privilege and not a right. But, just like all of the clothes-I-will-fit-into-one-day that I recently purged from my closet, you can also rid yourself of flight anxiety with these tried-and-true tips. Keep in mind—waiting on your weight to change may leave you waiting forever, and you absolutely deserve to take that trip in exactly the body you’re in today.

You have the right to take up space. 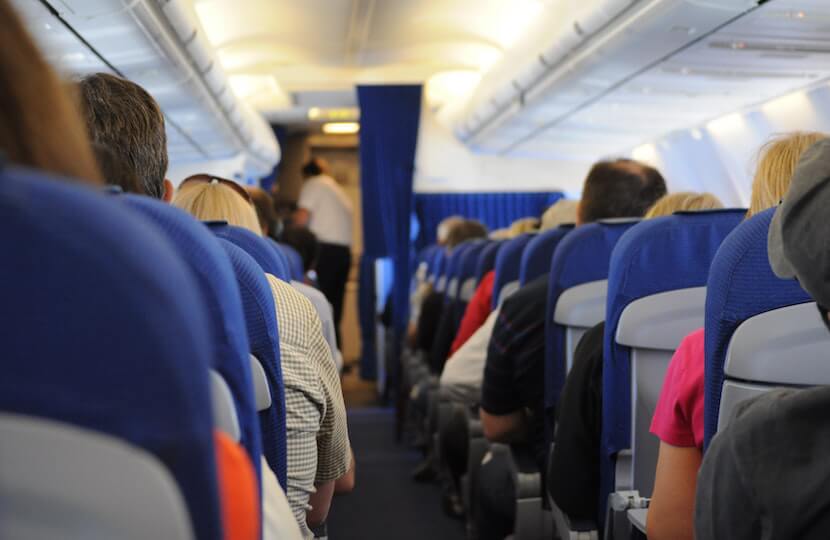 Alexander Graham Bell once said, “Before anything else, preparation is the key to success.” You can’t control everything that happens on a flight, but there are a few ways to put yourself in a position for success. First, try to take flights at the least busy times. I’ve found that super early mornings, Fridays, and Sundays generally have full flights with no chance of getting an empty seat next to you. Red eyes, everyone’s favorite, are usually the way to go to ensure the flight isn’t completely full.

If you have a travel buddy, ask if they’ll sit next to you. That way, you can lift up the armrest on both sides. I’ve flown with some people who have agreed to sit by me and others who couldn’t due to their own middle seat anxieties. If your travel partner agrees, the best option is to book your flight together so you can book the aisle and your friend can book the window seat and hope that no one takes the middle seat between you.

This generally works best in the least-desirable aisles near the back of the plane. If your travel partner isn’t comfortable with this plan, or if you are traveling solo, try to grab an empty aisle seat. If you’re considering booking a window seat, just know that the armrest won’t raise. The same goes for bulkhead seats, so avoid those. Also, I recently learned this super cool trick where you can raise the seemingly immobile outside aisle armrest.

Do your research. Luckily, there are many people just like you who are reporting on their flight experiences online so that you can learn from their mistakes. Just like you would for your next Bumble date, do a deep dive on the internet to discover which airline is best for you. I personally find Reddit to be the most helpful tool in getting honest advice about which airline caters to plus-size bodies. You can also check out Seat Guru, which has detailed measurements of the width of seats for every airline and plane.

In my personal experience, I’ve found the new planes on United Airlines to be the least accommodating for larger bodies. Delta and JetBlue are the most comfortable for me. When it comes to plus-size friendly airlines, the prize for most accommodating goes to Southwest, as they’re the only domestic airline with a Customer Of Size policy. You can book two seats next to each other and then be refunded the cost of the additional seat. Many larger-sized frequent flyers prefer to book a first-class flight so they can assure they’ll be comfortable and not bother other flyers, but that can be extremely expensive.

Some politicians are calling for minimum airplane seat size standards. Hopefully, in the future, this much research won’t be required as sizes will be standardized.

Get to the airport as early as possible, especially if your flight is at a busy time. Monitor how full your flight is or if someone has taken the seat next to you. Turn the gate agent at the airport into your best friend. Don’t be afraid to ask if they can move you to a row with an empty middle seat. If the seat next to me is already empty, then I’ll ask the agent to make sure it remains that way if possible. I’ve had gate agents put a hold on the seat next to me so no one takes it. When I traveled to Paris a couple years ago, they did that for me, and I ended up having the entire aisle to myself both ways. It was like winning the flight lottery!

If you end up on a flight with every single seat booked, don’t panic!  Hopefully, you’ll sit next to a non-judgmental person. If you’re uncomfortable where you are, you can quietly ask a flight attendant to help you find another seat. I’m always scouting for children in middle seats because I personally don’t mind sitting next to a screaming baby if it means the armrest can go up.

Over the years, I’ve had one or two negative experiences. You may have heard about plus-size influencer Natalie Hage experiencing fatphobia from a neighboring passenger and those kinds of trying incidents do happen every so often. The worst for me was when a plus-size woman in the middle seat wanted me to move from my aisle seat. Instead of being an ally, she had the flight attendant come over to me and ask me to move. Everyone was looking at me, and I was mortified. Flight attendants are not actually allowed to do this, and on principle, I didn’t move. However, I learned a lot from that experience. Not only about my rights as a passenger, but that there is no shame in my size. Just because someone is uncomfortable in their body, doesn’t mean I have to be in mine.

Step #4: Pre-board & Get a Seatbelt Extender

I always ask the gate agent (my new best friend) to pre-board. The only thing worse than getting those fearful looks from fellow passengers as you walk down the aisle is accidentally smacking them with your butt as you try to squeeze through. I usually walk onto the plane with those who also need more time boarding and am able to situate myself before the plane becomes full of passengers. It may seem small, but it has taken a lot of anxiety out of traveling for me. Plus, first access to overhead storage is not too shabby.

You can quietly ask for a seat belt extender as you board the plane. An attendant will bring it right to your seat.  If you’re too embarrassed to ask for one, you can buy your own. They are as cheap as $13.00, but beware—I’ve been told that they work with most, but not all airlines.

Step #5: Stretch Out and Get Comfortable

If you’re on a full flight, my best advice is to get that armrest up immediately. Make sure all of your belongings are in overhead storage, including jackets, so that you have the most leg room possible. I carry most of my weight in my stomach so I know that there’s no way the tray table is coming all the way down. I usually buy a couple of bottles of water before getting on the flight in lieu of the open cups of beverages they supply on the plane because I know I won’t have anywhere to put them.

Just remember, you have the right to take up space.

Maybe that mantra doesn’t work for you, but you should start to believe it. Flying is a right, not a privilege. You are paying just as much money as the person next to you for shrinking seats. If you don’t have as many size restrictions when traveling as I do, make sure you take note of your size privilege next time you fly and be extra kind to the fat person sitting next to you. It took me a long time to build up the self-esteem to walk onto a plane with confidence. If you’re like how I used to be, and you’re not there yet, it’s okay. But this world is full of beautiful people and places, and you deserve to see them all—including your mother, who wants you to get on that plane for Thanksgiving!

In need of a wardrobe refresh before your next trip home? Check out our latest arrivals.

Leaving on a jet plane? Avid traveler and Dia&Co customer Jackie Schwartz shares her tips for having the best possible experience when flying as a fat person.