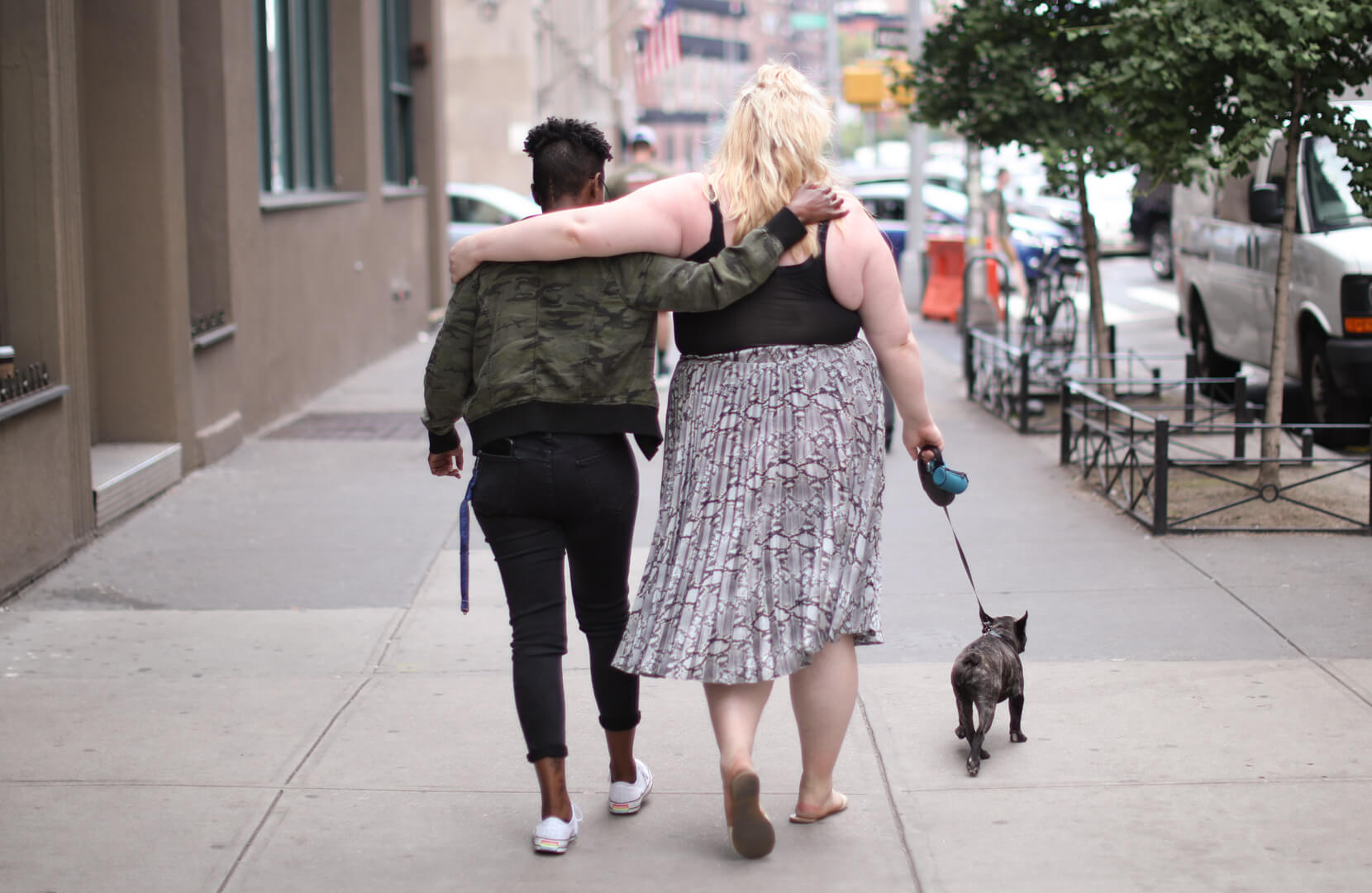 There’s no question that society as a whole is inching ever closer to truly being inclusive and body positive. Unfortunately, our straight-size family and friends, though well-intentioned, may have missed the memo. From diet talk to “Do I look fat in this?” questions, the seemingly innocuous way loved ones talk about their bodies can deeply affect how we feel about our own bodies. The words people use, even when they’re not about us, can have great impact—so it’s time to challenge those social norms and bring those we’re closest with into the conversation.

We reached out to you, the Dia Community, to see how you’d like to see the people around you change for the better. With these small requests, we can encourage allyship and work toward building a world where we all feel safe and supported. *Answers have been condensed and edited for clarity and length.

“Don’t tell fat women that they aren’t fat. I am fat—and it’s not a bad thing. By saying, ‘You aren’t fat,’ you’re telling me that being fat is bad and undesirable and that you don’t see me as one of ‘those fat people.’ We are a broad and beautiful category with many multitudes. Don’t tell me I’m not part of this group of people just because you like me and you hate fat bodies.”

2. Don’t assume someone lost weight just because they look great.

“Everyone should stop saying, ‘You look so great in that picture! Did you lose weight?’ I’ve started just letting people know that no, I haven’t lost any weight, but yes, I do look great in that picture. I don’t have to lose weight to look good in a picture or an outfit. I can be fat and exactly the same size as I have been and also look bomb.”

3. Talk about something other than appearance.

“I live in one of the most self-obsessed cities in the country, but I seldom have even a casual conversation with another woman in which their fad diets don’t come up. Lunches with co-workers are fraught with concern about everyone’s various dietary restrictions and anxieties. It’s common for other women to put down their own appearance. Self-hatred is so ingrained in most women that they don’t know who they’d be without it and are fearful or resentful of the idea of giving it up. I don’t think people who hate themselves make very good allies.”

“Be careful with your tone, specifically when giving a compliment on style or an outfit. Oftentimes, it feels like a pity compliment—or like there’s a sense of surprise when my outfit looks cute. In my opinion, it’s always better to say, ‘That looks great on you!’ vs. ‘You look great in that.’ The difference is subtle, but it makes me feel like I put life into the item (which, duh, I did) vs. the piece giving me life (which I had before in all my other outfits).”

“My daughter (a yogi, climber, runner) has battled body image in the past, but listens very closely to my point of view and celebrates all the articles I send her on plus-size women doing the same things she does. And here’s the sad thing—she did not learn about hating her body from me. It all came from the society around her. We, as mothers, can only do so much. Happy to say, though, that she is much less concerned about weight and much more concerned about her love of the outdoors and healthy living. Times are changing, but society is still pretty unkind.”

“Don’t assume that I’m on a diet. My least favorite phrase is, ‘Are you sure you want to order that?’ Eating out at a restaurant is a treat for me, so yes, Carol. I definitely want to order my favorite thing on the menu, even if it is 1200 calories.”

7. Understand the impact of your words.

“My biggest pet peeve is when people talk about how heavy or fat they are in my presence when I am clearly the larger person. I have been learning to accept myself and let my outside reflect my inside. It bothers me because it is always an implication that they are ugly or disgusting for having extra weight. It always stings and I internalize it, even if they are completely oblivious to what they are saying.”

Want to share your take? Request to join the Dia&Co National Community Facebook group and get in on the conversation!